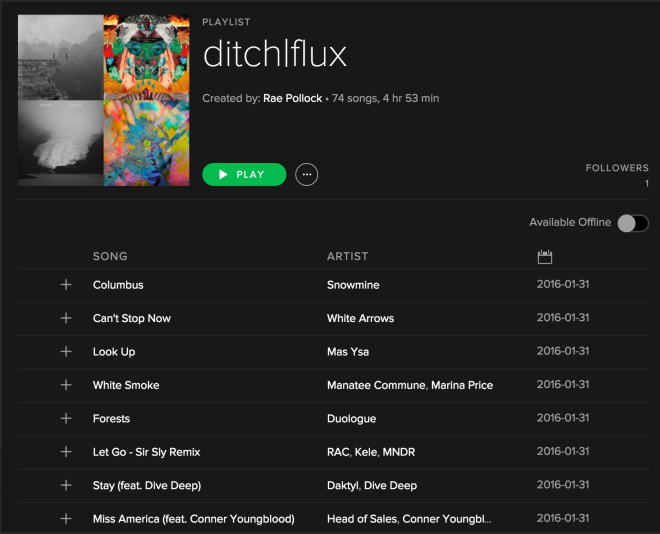 I referenced this playlist in an older post of mine, and I feel it deserves some explaining.

I’m a strong believer that every playlist someone makes should have a strong name. None of that “chill vibes” or “newish” garbage. That’s lazy and quite frankly insulting to the music you’re cultivating in your playlist.

I deliberately spent hours coming up with the name of (and pictures for) this playlist: “ditch|flux.” Allow me to explain.

One could say that a few months ago I felt as though I was in a “ditch,” and I wanted to get out. Or, “ditch” that feeling, if you will. I wanted to ditch the ditch essentially. “Flux” is this insane word that means, according to Dictionary.com, “A flowing or flow, the flowing in of the tide, and continuous change, passage, or movement.” It also means really different things in science terms, but that’s completely irrelevant as science is the worst. When someone is in flux, and I’m not using the science terms here, it means he or she accepts the ebb and flow of life. This concept – this acceptance of life’s ups and downs – is one of the most attractive things to me at this point in time. Henceforth, I want to ditch the ditch to enter flux, and the songs on this playlist try to help with that goal.

While naming a playlist this in-depthly may be admittedly silly, I think the overall idea of “ditching the ditch to enter flux” is completely important. In order to think positively about the future, I think it’s important for someone to understand that not everything from this point in time is going to be spectacular and better than it is now. That’s definitely not how life works. So, in order to have realistic expectations about the future (and thus not setting yourself up for disappointment), you must understand that life is going to suck at some points later, but that’s okay, because the world ebbs and flows.

The main point of this idea, I guess, is to get yourself out of the ditch. Depression really can feel like a ditch that you can’t get out of, but the first step to climbing out of that ditch is deciding to.